A few days ago I released Lazy Baduk, a Leela Zero analysis tool for Android. You can download it from Google Play, or directly from the Github release (see below). 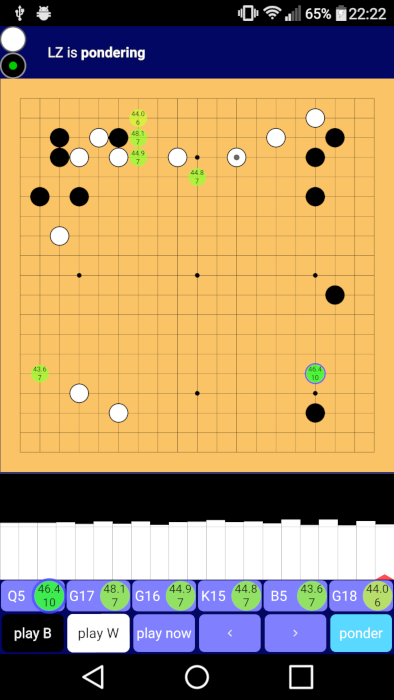 Lazy Baduk focuses on making it as easy as possible to start entering and analysing moves with Leela Zero, with core support for pondering, variation display, AI play (including autoplay for black and/or white), and a winrate graph. I’ve kept the interface as simple as possible for that reason, although I may in the future add features such as SGF save/load.

The version on Google Play uses the last 15x192 network, from July last year, as a tradeoff between strength and analysis speed. Larger networks are both noticeably slower to load on a phone, and slower to generate playouts. I’m not sure what is the best choice to balance strength and speed, but the current version seems to perform fairly well.

I’ve also made available some other network versions for direct download. The apps have different names and can be installed simultaneously if you want:

Lazy Baduk’s source is available on Github if anyone is interested, although it’s a messy combination of the old code for my SGF editor noGo and new code to interface with Leela Zero. The app is written in Python using the Kivy graphical framework, so it can also be run on the desktop. It works by including a version of Leela Zero compiled for ARM, running only on the CPU although GPU support might be possible in the future for some devices. Leela Zero does use as much CPU power as it can, which can drain the battery very fast - consider charging your phone while using the app!

If this is interesting to you, you might also be interested in lizzie on the desktop. Or on Android Ah Q Go is a very full featured SGF client supporting many bot play options, at the cost of less focus on diving into quick analysis.